Grind Designs is an annual exhibition as part of BYC’s B.fest, where young people design their own skateboard artwork. The artwork was done by hand onto a paper template, and then scanned and printed onto vinyl, which was applied to the decks. After being displayed here, the young artists get to take their work home with them.

On Saturday the 1st of June 26 young members of the skatepark took part in an all night challenge, to skate the park from 10pm until 8 the next morning.

We had an absolute blast through the night, the skating didn’t stop and everyone was a treat to hang out with. Most importantly they’d been gathering sponsorship from friends and family in the preceding weeks, and between them amassed an insane £3,301! As a charity funding like this is essential to allowing BYC to continue to progress and provide for all its users. You’ll see the benefits this money brings over the coming weeks.

We want to say a massive thank you to everyone that took part and the over 200 people who donated in their names. We’re hoping to make this an annual thing, keep an eye out if you want to take part next time!

In June and July BYC is again delivering the Go Skate Project, a programme teaching skateboarding as a pathway for better mental health and wellbeing.

The course is in conjunction with and funded by Brighton & Hove Council, and is for young people aged 11 – 16 who identify as having issues with mental health, anxiety or depression.

Young people looking to join will need to be referred to the council’s Healthy Lifestyles Team. To refer yourself or a young person, or for more information, call 01273 294589, or email healthylifestylesteam@brighton-hove.gov.uk. Alternatively you can get in touch with us direct and we can get the process going for you.

This will be the sixth Go Skate Project course that BYC and BHCC have put on. Our previous projects have been a great success in helping young people discover a new activity, gain confidence, challenge themselves and meet new people. Many have become regular visitors to the park since attending.

The course consists of six weekly lessons on Tuesdays from 4:15 – 5:15, starting from the 18th of June. It is free of charge for those who sign up!

Posted on 1st April 2019
0
With the inaugural Olympic skateboarding events fast approaching, we recognise that our country’s chances of gold are at the moment rather slim. As a skateboard focussed park, we feel we’re on the perfect position to rectify this, and so, after some piloting, are launching our Olympic level skateboard coaching program to the public. We’ve compiled a short video about what we do and how we’ll achieve our goals. Please take a watch and if you know someone aged 15 or under who you feel has potential waiting to be unleashed, please get in touch to refer them.

Local man Zane Crowther has recently released a 30 minute banger, showing off 2 years of Brighton street skating from a big crew. Check it out below and visit Vague Magazine for some amazing pictures shot by Henry Bailey to go alongside it.

The Brighton & Hove Skateparks Association are currently looking into the feasibility of a redevelopment of Hove Lagoon skatepark.

The skatepark was built in 2007 and has been suffering from wear and tear for a number of years, costing the council money to cover yearly repairs which break again rapidly, along with creating a hazard for people using the skatepark.

Thank you to everyone who filled out the survey on this. We had over 350 responses, which were overwhelmingly positive! This show of support has allowed us to move forward with the campaign. Here’s where we are so far… 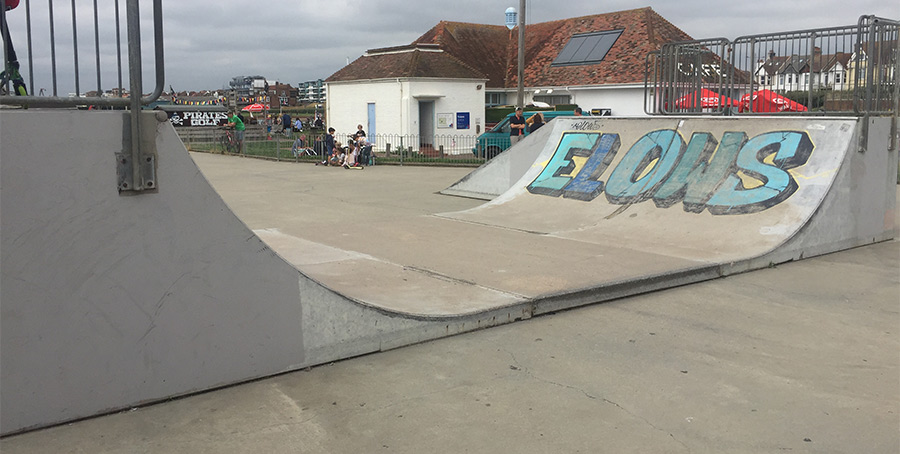 Last week myself and Brighton council’s skatepark development officer Ricardo Magee last week sat down with Friends of Hove Lagoon secretary Sue Johnson, Wish Ward councillor Robert Nemeth, and seafront development officer Toni Manuel, to present to them the survey results you can see below. We discussed what we’re looking to achieve, the impact we hope it will have, and the next stages in the process.

We also sat down a few days ago with famous DJ and Hove resident Fatboy Slim, who owns the adjacent cafe. He was very passionate about the park and the proposal to improve it, and offered his support going forward. We’ll be meeting again in the near future.

Firstly we’ll be presenting our proposal to a larger audience at the next Friends of Hove Lagoon meeting in February, to give local residents a better picture of what we’re hoping to achieve. Alongside that we’ll be drafting up some draft plans to show the proposed footprint and visual impact on the area.

From there it may have to go through a planning application, depending on how drastic the change is viewed as in the eyes of some important council types. If all that is successful then we’ll be able to start chasing potential funding streams to try and raise the full amount needed.

What’s the timeline for all this?

This whole thing is still in its very early stages. If I had a pound for every time I’ve heard “I heard they’re rebuilding the Lagoon” then we’d be halfway to funding it already, but please keep in mind that this stuff doesn’t just happen. So at the moment there’s no timeline, there’s no greenlight and it’s still all jut hypothetical at the moment. So if you’re worrying about whether there’ll be a bowl in the design or not, that’s all waaaaay down the line.

We received hundreds of amazing insights on what people like and don’t like about the park, what they’d like to see in there and lots of ideas and suggestions on the design. We’ll be keeping all of them on record, as well as asking for even more input when the time comes to sit down with the chosen construction company and start designing. But there’s a lot to get through before that can happen. Thanks for reading, we’ll be posting more updates as they come.